The effect of steady and cyclic environmental conditions on the tensile behaviour of a structural adhesive under sustained loading
16732
post-template-default,single,single-post,postid-16732,single-format-standard,bridge-core-2.9.5,qodef-qi--no-touch,qi-addons-for-elementor-1.5.1,qode-page-transition-enabled,ajax_fade,page_not_loaded,,qode-child-theme-ver-1.0.0,qode-theme-ver-27.9,qode-theme-bridge,qode_header_in_grid,wpb-js-composer js-comp-ver-6.7.0,vc_responsive,elementor-default,elementor-kit-7 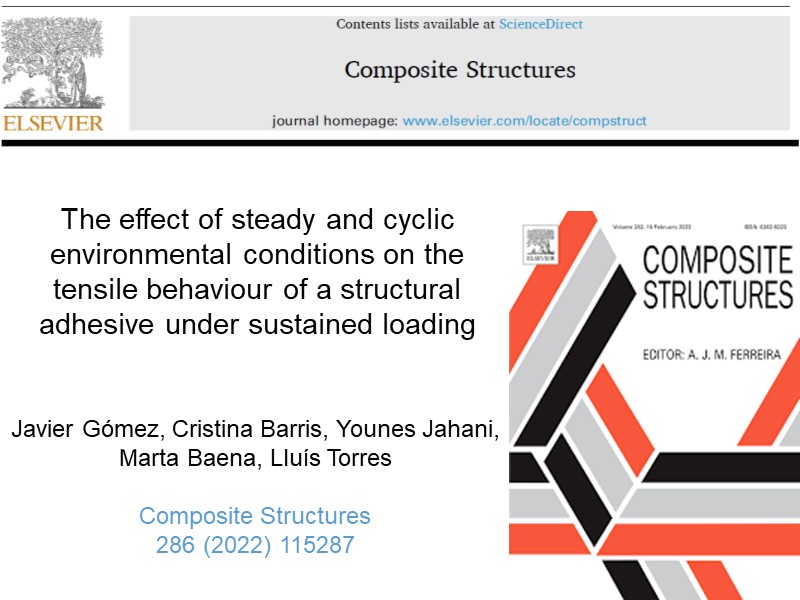 Posted at 15:00h in news by amadeweb
0 Likes
Share

The paper entitled “The effect of steady and cyclic environmental conditions on the tensile behaviour of a structural adhesive under sustained loading” presents part of the work performed by Javier Gómez within the framework of his PhD thesis, with Cristina Barris (his PhD advisor) and other researchers from AMADE as co-authors.

Structural adhesives are commonly used to bond Fibre Reinforced Polymer (FRP) materials to Reinforced Concrete (RC) structures so they can withstand service conditions. This paper presents an experimental study on the combined effect of sustained loading and service steady and cyclic temperatures on the thermophysical and mechanical properties of an epoxy adhesive.

Four experimental series consisting of nine adhesive tensile dog-bone specimens were tested under sustained loading and temperatures ranging between 18 ◦C and 43 ◦C for a duration of 1000 h. Moreover, the residual properties of the adhesive have been evaluated through instantaneous tensile tests and Differential Scanning Calorimetry (DSC) after sustained loading tests.

Results showed a significant increase in strain with time, a reduction in the mechanical properties, and an increase in the glass transition temperature and curing degree of the adhesive after the exposure at service conditions and sustained loading.

This work was supported by the Spanish Government (MINECO) [Project Ref. BIA2017-84975-C2-2-P]; the University of Girona [grant IFUdG2018/28 and MOB2019]; and the Generalitat de Catalunya [grant number 2019FI_B 00054]. The authors wish to acknowledge the support of SIKA for supplying the epoxy adhesive used in this study.