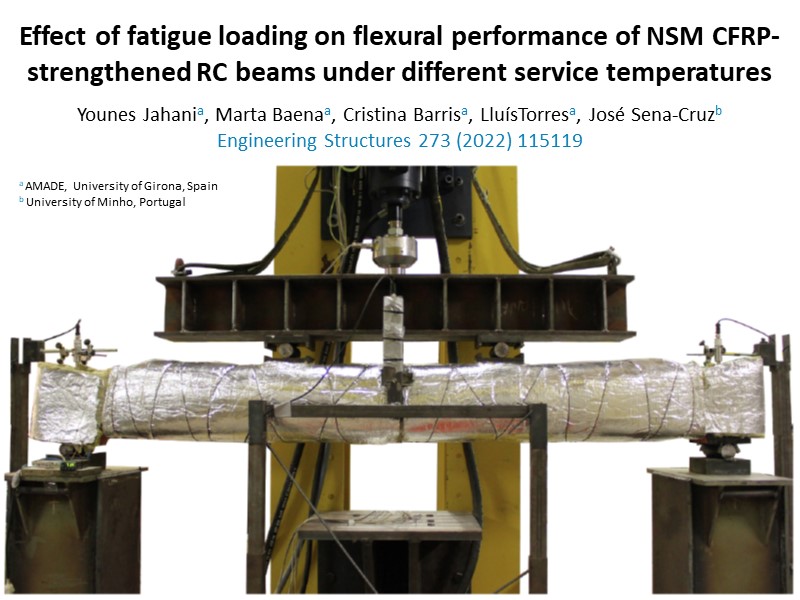 Posted at 11:52h in news by amadeweb
0 Likes
Share

We are glad to share our new paper entitled “Effect of fatigue loading on flexural performance of NSM CFRP-strengthened RC beams under different service temperatures” published by Younes Jahani (PhD student) and researchers from AMADE-UdG (Marta Baena as the PhD advisor, Cristina Barris and LluísTorres) and from the University of Minho (José Sena-Cruz). This Open Access paper has been published at the journal of Engineering Structures, Volume 273 and it is available online at: https://doi.org/10.1016/j.engstruct.2022.115119.

This paper presents an experimental work to investigate the effect of fatigue loading and high service temperature on the flexural performance of near-surface mounted (NSM) carbon fiber reinforced polymer (CFRP)-strengthened reinforced concrete (RC) beams. The experimental program included 11 beams, where the effect of the strengthening (CFRP) ratio (0.06 % and 0.18 %), fatigue load level (R1 = 0.57 and R2 = 0.38) and applied temperature (20 °C and 70 °C) have been considered. Experimental results on fatigue tests showed that high service temperature resulted in an increase in deflections and reduction in the stiffness of the specimens along the test. Moreover, the application of fatigue cycles with larger amplitude resulted in the failure of the specimens (by steel rupture), whilst specimens submitted to lower fatigue amplitude survived to the fatigue cycles. The NSM CFRP-strengthening helped to postpone the final failure of strengthened RC beams after steel reinforcement rupture during the fatigue test. Besides, damage due to fatigue derived in lower residual yielding and ultimate load in the post-fatigue test.

This research was supported by the Spanish Ministry of Science and Innovation (MCIN/ AEI) under project PID2020-119015GB-C22, the Generalitat de Catalunya under the grant number 2019FI_B 00054 and mobility grant from Universitat de Girona (MOB 2021). The authors also wish to acknowledge the support of S&P Clever Reinforcement Ibérica Lda. for supplying the epoxy resin and the CFRP laminate used in this study.