Doctoral thesis on the effect of temperature on the flexural behavior of NSM CFRP-strengthened RC beams
16944
post-template-default,single,single-post,postid-16944,single-format-standard,bridge-core-2.9.5,qodef-qi--no-touch,qi-addons-for-elementor-1.5.1,qode-page-transition-enabled,ajax_fade,page_not_loaded,,qode-child-theme-ver-1.0.0,qode-theme-ver-27.9,qode-theme-bridge,qode_header_in_grid,wpb-js-composer js-comp-ver-6.7.0,vc_responsive,elementor-default,elementor-kit-7 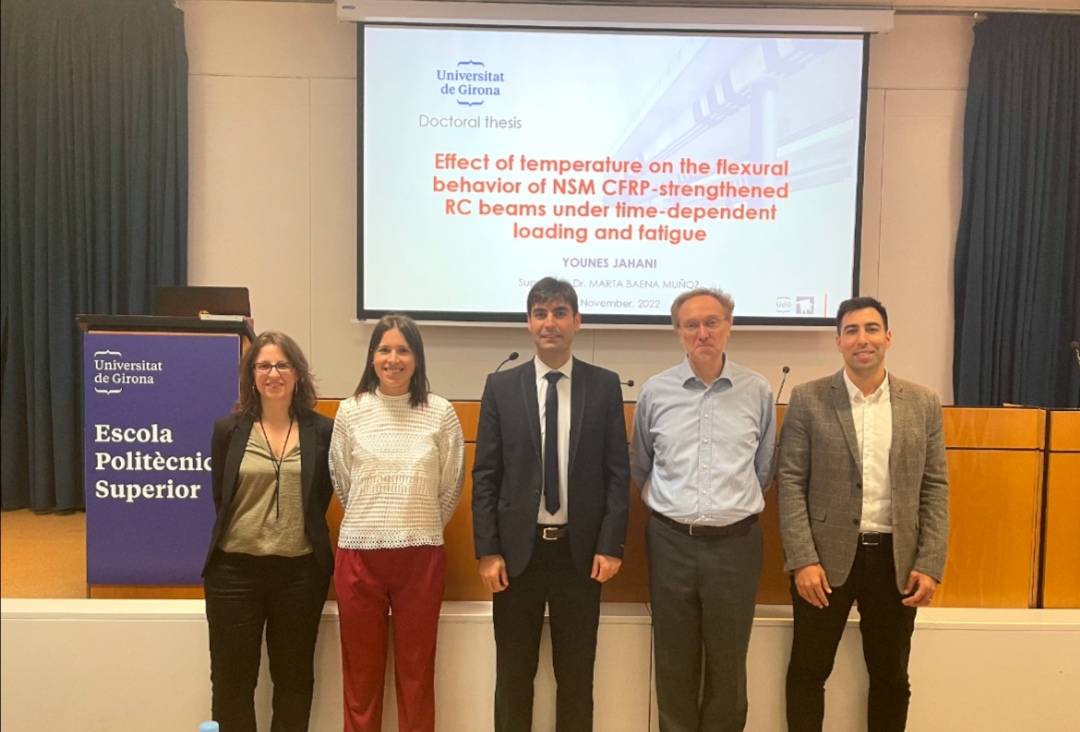 Posted at 21:56h in effancom, news by amadeweb
0 Likes
Share

Younes Jahani defended his PhD thesis entitled “Effect of temperature on the flexural behavior of NSM CFRP-strengthened RC beams under time-dependent loading and fatigue” on November 11, 2022, at the Polytechnic School of the University of Girona. The PhD thesis has been supervised by Dr. Marta Baena (AMADE – UdG).

The main objectives of this PhD thesis were to study the instantaneous, time-dependent and fatigue flexural performance of NSM CFRP-strengthened RC beams under high service temperature. To this end, instantaneous flexural tests on NSM CFRP-strengthened RC beams were performed to evaluate the effect of different temperatures, different CFRP ratios and different concrete compressive strengths on the load-deflection response and failure modes. Besides, analytical predictions on the instantaneous load-deflection curves were also presented, where the effect of shrinkage and temperature were accounted for. The time-dependent flexural performance of NSM CFRP-strengthened RC beams under high service temperature was evaluated in a second experimental program, where the effect of high service temperature, steel reinforcement ratio and CFRP strengthening ratio was analyzed. In this experimental work, the time-dependent behavior of the involved materials was also studied. Furthermore, an analytical work, based on AEMM, was also presented to predict the time-dependent deflections of the tested beams. To continue, a third experimental program was performed to evaluate the fatigue flexural behavior of NSM CFRP-strengthened RC beams. The parameters of the experimental program were the service temperature, the CFRP strengthening ratio and the cyclic loading level. To conclude the experimental work carried out in this thesis, resin specimens were also tested in tension and compression to study the effect of curing, post-curing and testing temperature on its mechanical and physical (Tg) properties.

The thesis has been developed within the LIFERCON and EffAnCom projects and supported by the predoctoral grant of the Generalitat de Catalunya under the grant number 2019FI_B 00054.

This research was supported by the Spanish Ministry of Economy and Competitiveness (MINECO/AEI/FEDER, UE) under the project number BIA2017-84975-C2-2-P and the Spanish Ministry of Science and Innovation (MCIN/ AEI) under the project number PID2020-119015GBC22. The period of research has been funded by the Generalitat de Catalunya under the grant number 2019FI_B 00054.